This is a surface treatment that can prevent rust by forming a special oxide film on iron, which is prone to rust.
It is used as a temporary rust preventive treatment during pre-assembly, which does not require the corrosion resistance of zinc plating and nickel plating.
Since the film turns black, it is used for processing products that take advantage of the jet-black appearance. 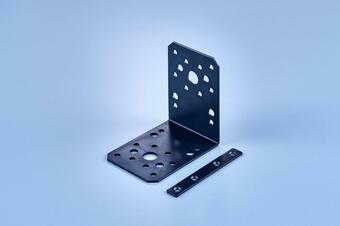 The black-dyed surface is covered with an oxide film of dinitrogen tetroxide, which makes it less likely to rust.
Since it only forms an oxide film on the iron surface, there is almost no dimensional change before and after the treatment, and it is effective as a rust preventive treatment that requires processing accuracy.

Corrosion resistance can be significantly improved by applying oil after dyeing black.