Alumite is a general term for anodizing aluminum. It is a process that uses electricity to form an aluminum oxide film on the surface of an aluminum material.
This aluminum oxide film is also called an alumite film and has the same properties as ceramics such as alumina, so it improves corrosion resistance and wear resistance. It is also possible to improve releasability and slipperiness by adsorbing PTFE (polytetrafluoroethylene) fine particles on the surface after alumite treatment.
We perform the treatment with sulfuric acid bath.
We also support hard anodic oxidation, which is usually superior in hardness and wear resistance to alumite coating. 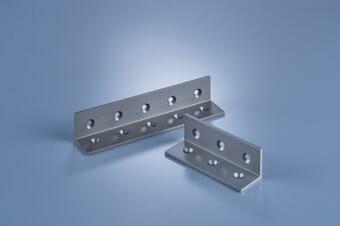 Having similar properties as ceramics, the alumite film has good corrosion resistance.
However, there are cases where the aluminum material is corroded by the formation of cracks in the coating. By changing the alumite liquid and treatment conditions, it is possible to create a film that does not easily crack.

The alumite film has a structural arrangement of hexagonal columns with small holes in their centers.
There are also treatments that use these holes to color the film by impregnating it with dyes, etc., and to attach PTFE particles (Teflon) to improve wear resistance and slipperiness.

Various aluminum materials (appearance may change depending on series)